Why not just use a phone to air drum?

In the last three years, a few air drumming products have launched. They all use electronics on the sticks to interface with a phone.

We agree that using just a mobile phone and a pair of drumsticks would be the ideal way to make an air drumming instrument. And we tried it (see below).

Here are four reasons why we still use a high-speed camera for Aerodrums though.

1. You need to be able to reliably hit the drum you want

Without several external points of reference (like the many pixels in a camera sensor), it’s not possible to track the position of the drumstick tip. You can only track the direction that the stick is pointing towards.

Your phone contains the same kind of electronics that Freedrum etc put on the stick to track its direction. So, here’s an experiment you can do to see how reliable this is:

Start a compass app and select the spirit level mode. Now, shake your phone for a bit. You will see that it takes a little while for the line to stabilise after you stop. 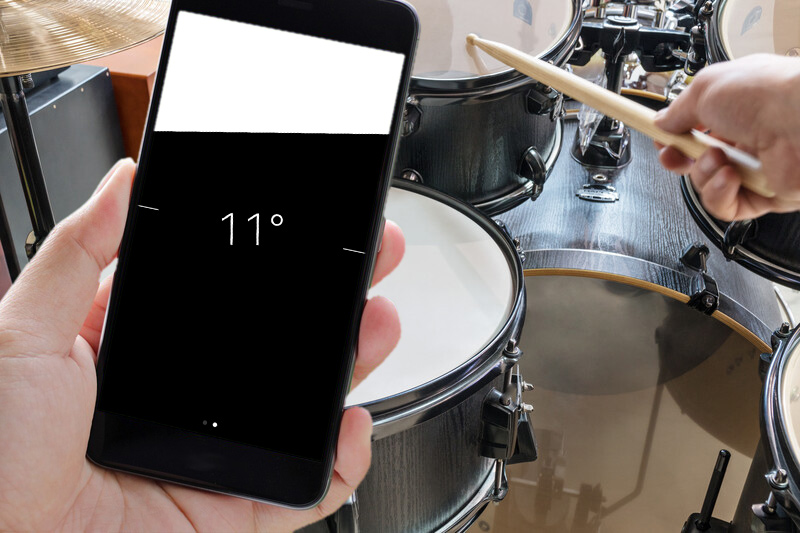 If your phone was as light as a drumstick, the level line would have been off for even longer. Because there would have been about three times the acceleration for the same effort. But drumming is all about giving your sticks a good shake. So, the electronics often lose track of where your stick is pointing.

The outcome is that the wrong drums trigger through no fault of your own. And if you’re a beginner, maybe it’s you, maybe it’s the device, who knows.

Freedrum etc know the tracking isn’t reliable. So, they tell you to “recalibrate”, which isn’t possible in the middle of playing.

2. Drumming with audio delay is no fun

When drumming, the time it takes between you hitting a drum and hearing it is critical. If you can perceive any delay, it is very distracting. And it doesn’t take much delay at all for drumming to get unbearable. Phone based air drums fall short for three reasons:

When playing drums, you expect to be able to play loud notes, very soft notes, and anywhere between. You do that by controlling the speed of your drumstick.

With a camera, you can measure that speed very accurately. Better than even high-end electronic drums can.

With only electronics on the drumstick, at best you can get a rough idea. At worst, when drumming fast, the only information you get is “the stick is moving faster than I can measure”. And with current electronics, you reach that speed playing even basic grooves. As a result, Freedrum etc offer very limited expressiveness.

4. You need the drumstick to feel like a real drumstick

The way the drumstick is balanced and how it feels in the hand is key to drumming. With a camera, you can use standard drumsticks with a visual marker. The marker is light enough (a few grams) to keep the drumstick balanced.

Without a camera, you need to put electronics and a battery on the sticks. That means too much extra weight to keep the balance intact. It also means plastic, introducing many issues. Like durability, slippage, perspiration and feel compared to wood.

On a drum set, you often play different drums with the stick naturally pointing in the same direction. For example, the snare and the high tom. So, a device that only knows about direction forces you to play one drum or the other differently than you would on a drum set.

This is why Freedrum etc tell you to point the drumsticks in unnatural positions. This gets in the way of holding the sticks correctly.

They also tell you to keep the electronics facing upwards (because turning the circuit throws the tracking off even more). This is not easy to do as the drumstick has a natural tendency to turn in your hand as you play. And it encourages gripping the stick tight, when a relaxed grip is better for drumming.

We would say these things, wouldn’t we?

No, we wanted to remove the need for a camera even before the other air drums launched. We worked on this in a collaboration with Intel in 2016.

The electronics Intel offered were their best shot at the technology that Freedrum etc use. We pushed the technology as far as it could go, together with a team of engineers from Intel.

We got it working as good as Freedrum, but it wasn’t playable. So, when the time came to demo the result at Intel’s annual developer conference, we had to use vanilla Aerodrums for the audio. We could only use the information from the electronics on the sticks to enhance the stage visuals.

There hasn’t been any revolution in this type of electronics since 2016. In fact, because chip manufacturers have focused on miniaturisation and power saving, accuracy has remained the same or declined. So our conclusion that the technology is not suitable for playing drums still stands.

Bigger fish than us agree

There are big companies offering products that track an object you hold in your hand. Facebook is one, with their Oculus Quest virtual reality headset and its controllers. They track hands mostly for games, not for tasks as demanding as playing drums. But they still use cameras to get the job done (they’re on the headset).

As far as Intel is concerned, they terminated the tech (Intel Curie) in 2017, not for lack of collaborators trying exciting things with it.

There is a lot more to say, featuring words like “accelerometer“, “gyroscope”, “drift”, “inertial measurement unit”. But this site is about giving people access to drumming, not about tech and gadgets.

The proof is in what users play

Aerodrums is the only air drumming product that uses a camera and no electronics on the sticks.

Thanks to that, it can accurately track the drumstick tips’ 3D position. And it meets the criteria above that are required to play the drums.

Aerodrums users often upload videos of their playing. Here is a recent one. Thank you Mitch. Check out this page to see more.

It took us years to finally say something about Freedrum and the similar products that followed. That’s because we thought we’d come across as sour grapes to some people.

Also, when Freedrum did their first Kickstarter, we thought it would help popularise the air drums concept.

So unfortunately, we’ve had to change our minds. We now believe these products and campaigns are leading people to wrongly conclude air drums are only good for dabbling. But air drums can be a serious (and in some aspects superior) alternative to electronic drums. If done properly.

Here are a couple of links to the user comment section of such crowd funding campaigns: Freedrum Kickstarter, PocketDrum Indiegogo. Kudos to Freedrum and Kickstarter who respected the backers’ comments. On the other hand we saw PocketDrum delete feedback from backers.

We’re not sure what motivates these brands to make promises they know their technology can’t support. Maybe they are trying to emulate the “fake it until you make it” Silicon Valley culture.

We reject this culture (we don’t even have any investors). Making sure that our products meet users’ needs and expectations is our priority.