Well, today i had a demonstration of the new and upcoming FREEDRUMS (release date sept 2017). They are a simple attachment you attach to any drumstick of your choosing and using bluetooth 4.1 they connect to IOS, ANDROID, PC AND MAC and play flawlessly. Setup time is minimal and latency is fantastic. Now i am truly a portable drummer with only my phone and 4 tiny black sensors THAT DONT NEED LIGHT IN ORDER TO WORK!!!!!!!

Costing just $99 for two or $180 for 4 (two for your feet), they put aerodrums to absolute shame. We have been waiting for updates from aerodrums regarding ios and android capability for a long time now but sadly they have not delivered. Needless to say that i have already pre ordered my freedrums and cannot wait.

Sorry aerodrums but your missing a trick here.

I think Freedrum rocks seems to be a very good gadget. I ordered too.

But i think its too early to compare.

I use Aerodrums about 3 years and its awesome.

From my perspective this "Freedrums" posting is really poor. Seems that Aerodrums is doing very good actually. If not there wouldn't be the need for such posts.
The Freedrums approach is completely different and I wonder how these guys will solve issues like stopping cymbals, playing rim-shot etc.
Have you seen the hands of the guy in the videos and the way he holds the sticks. Seems that they have to be held in a special manner so that it works out properly. In addition you have to turn the stick in order to play open HiHat. From my perspective this is not "real" drum feeling...
Top

Just checked out Freedrum. Not impressed at all... OK, it doesn't need light, and you can use it with your phone (possible Gear VR update in the future).
BUT you have to hold the sticks in the same position, and you have to rotate your arm (and sticks) to the correct angle to hit the correct drums.

While using Aerodrums you only have to hit the right place in space - which feels much more realistic!!!!
So - for now - Aerodrums is the absolute best choice for airdrumming.

Each time i use, i need to update the sensors.

i hope this change and get better, otherwise i will not use it anymore.

I can´t get the kit tunned and there´s no chance to change the drum pieces.

I think that in next 2 years, may be Freedrums will worth its use.

I actually love the freedrums. And above all else, at least I can play them in total daylight, even outside. Takes just 10 seconds to setup rather than aerodrums dodgy ps3 camera that moves about everywhere. It’s trial and error with it until you get the right angle. And then low and behold, you have a bright spot somewhere behind you that is triggering the drums to go off randomly, forcing you to move it yet again to somewhere even darker. Aerodrums is good for one thing... and that’s. Night time playing! If you have white curtains, your screwed...

Aerodrums was a nice idea at first, but as far as I can see, there havnt been any MAJOR updates to it since it’s release many moons ago.

FREEDRUMS are already introducing their newest app in lesss than a months time that will enable total customization of where the drums are places, including how many and what type of drums you play. Bluetooth is the future for drumless drumming! Enough said....

Not saying freedrums is flawless, it’s anything but. But I see it’s potential and future possibilities.

Come on aerodrums. It’s time to move on to version 2.
Top

Funny that you love Freedrums so much. I know a couple of guys who was stupid enough to buy it. They both state that they would rather not play at all than using this piece of crap.
So I guess its really not that great as you keep posting on this forum.

No, it appears to me (Google is your friend) that the following users on this forum:
mashworth
fillipio99 (user banned in June 2015 for having flamed users on this forum)
drumfill
drummingman
(and maybe others) are all the same person. Google shows also his postings against Aerodrums on amazon.co.uk. I don't know why (all had started because he couldn't get a promo code), but he's doing his personal war against Aerodrums since 2015.

rather than aerodrums dodgy ps3 camera that moves about everywhere

You are right, just putting the camera on a table isn't really a reliable solution, it took me less than one hour to find out, and the first thing I've done before playing was to find a way to mount it on a camera tripod. May be this would have been more appropriate for you to do first than trying modify lamp, sticks and foot-markers.


Here you are wrong, there had been an important update this year with a lot of changes, especially the feature allowing the elimination of light-sources in the view of the camera.


you have a bright spot somewhere behind you that is triggering the drums to go off randomly, forcing you to move it yet again to somewhere even darker

See my last comment about the feature allowing the elimination of light-sources in the view of the camera.


Bluetooth is the future for drumless drumming!

You are telling that bluetooth is the future of airdrumming. But it's not bluetooth who does the motion capture, it's the gyroscope chip in your sensors. I've tried a lot of vr-apps in quite a bunch of smartphones with gyroscope and they have all more or less the same problem: drifting. For example you are sitting in a virtual cinema watching a movie and at the end you find out that you've done a complete tour around yourself.
I see in comments that drifting IS actually a problem with freedrums. I hope for you they can resolve this with a firmware update, or you will have to change all the sensors one day. A pure software solution like Aerodrums is far more superior (if there is any problem you have just to fix the software).


And one thing is sure, nobody will show a performance like this on freedrums very soon! 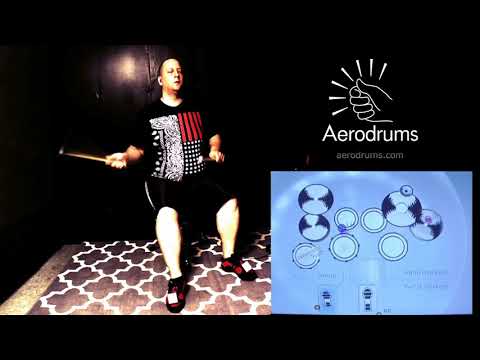 @ all who are considering using freedrums for learning to play real drums
Don't use this, especially if you are a beginner, you have to hold your sticks very tight and if you would play like this on a real drum-set it will sound awfully.
Top

Yes! I also, ALWAYS have an empty room which has painted black walls showing no light in from the outside world. I also ALWAYS wear black clothing whilst playing my aerodrums. The video is a bad example on ‘how aerodrums work’ since the settings he is playing in NO WAY resembles a persons home (since you cannot play these outdoors).

I have an RGB light strip, three RGBW lightbulbs and massive window with direct sunlight in my bright white-walled bedroom. In my experience, Aerodrums work flawlessly when properly set up.

I have yet to see a gyroscopic/IMU based tracker that does not need recalibration after 10-20 seconds of use.
Top
Post Reply
16 posts