Personally I think its a massive gimick. Utilizing the rebound of the drum stick is a massive part of drumming. In many ways, its the most important skill to becoming a good drummer. This product does not provide this at all. You would be so much better off getting an old used drumset, or saving up for a cheap electric. This would only benifit absolute beginners, and only for a very short period of time. Shit, it might even have the negative effect of nurturing bad habbits with your grip while you try to compensate for lack of rebound. This should really only be purchased if you already have a drum set...and I really hope no beginners are looking at this as a viable substitue
Also,I know, I got an electric kit for quiet practice as well. I didnt realize being on the second floor that the thud from the E bass drum pad would still reverberate through the floor. I dont have suggestions on e drums, unfortunately. They're all pretty crappy unless you have insane amounts of money to spend on um. Have you heard about the remo silent stroke heads? They're awesome. They make practiceing on a regular drum set super quiet, yet it still sounds good and feels natural. Also check out the zildjian L80 low volume cymbals! I would rather practice using the silent strokes and the low volume cymbals on an acoustic kit any day over an electric
Top

Personally I think it’s a very valid practice option...I probably wouldn’t recommend an absolute beginner to start from scratch with Aerodrums.. but I’ve found real benefits from being able to work things out, fills/songs etc...and anything you can pull off in Aerodrums becomes super-easy when you transfer it to a ‘real’ kit..I still think Aerodrums are amazing after owning mine for 5 years!

Aerodrums are awesome but it depends on what perspective you are coming from. I think these things should be their own instrument. They can frustrate you but often times they are awesome.
Top

I would love to see some videos of you doing this.

I wish this community was a bit more hopping, but I understand this is a niche thing.
Top

@bkmsx, @Ringowig, @condordontsurf
Nice to see you all coming in for defending our Aerodrums, but I think he’s just trolling. And PauloBucho got seduced by the dark side of the force (Sorry Paulo if you are passing by, but I couldn’t resist)

@Ringowig
Hi Ringowig, have you reposted your video? It’s still the best Jazz video with Aerodrums I’ve ever seen.

condordontsurf wrote:Aerodrums are awesome but it depends on what perspective you are coming from. I think these things should be their own instrument. They can frustrate you but often times they are awesome.

Me too, I see Aerodrums as a new instrument, and nothing can replace an acoustic drum-set. It’s a portable alternative to drums like a Zen-drum, a Cajon or even a midi controller for finger drumming, but one you can play in a drummer’s fashion! You need to learn some special technique, it’s the same with each one of these alternatives, and it doesn’t say, that you cannot make music with it.

condordontsurf wrote:I would love to see some videos of you doing this.

I hope bkmsx doesn’t mind if I’m responding for him. Here is a video he posted a long time ago.
Aerodrums Demo using modified sticks & mesh head 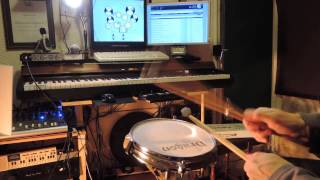 It was one of the videos I found when I was searching informations about Aerodrums before buying it. And I found it cool to have apparently some geeks in the Aerodrums community.
Here another solution done by a French guy I found after buying.
CREATE your own ELECTRONIC DRUMKIT for $350! (and sounds great !) 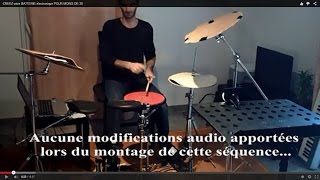 Surly, those solutions can make it more comfortable to play with Aerodrums right away and might be helpful for DAW-ing or just for having fun, but when it comes to learning I think you won’t really profit from the special muscle training provided by air-drumming and you will break one major functionality of Aerodrums, to be completely silent.

gammy13 wrote:Personally I think its a massive gimick.

Are your statements based on your personal experience with Aerodrums? I bet you haven’t even tried one. And I doubt your true motivation is discussion. So I’m not trying to convince you, I’m afraid it would be useless, but I’m responding for future users who might come to this forum to find informations about Aerodrums before buying it. I had done so. And they might get afraid by your affirmations.


gammy13 wrote:This would only benifit absolute beginners, and only for a very short period of time.

When I started to play Aerodrums I was playing drums for more than 30 years. Today 4 years later I’m still working at home exclusively with Aerodrums even having a mounted 2Box Drumit 5 available for giving lessons. And I’m still discovering things and feeling progressing from week to week.


gammy13 wrote:Shit, it might even have the negative effect of nurturing bad habbits with your grip

Playing on a regular drum set doesn’t preserve you, more than 1\3 of all my students who started learning drums self taught have/had bad habits. I think the best way not to develop them is starting to learn drums with a drum teacher and this is not different for learning to play Aerodrums. But sadly someone might run into trouble to find an open minded teacher who knows about air-drumming and is able to teach the good technique.


gammy13 wrote:Utilizing the rebound of the drum stick is a massive part of drumming. In many ways, its the most important skill to becoming a good drummer.

Nothing new, every drummer should know this.


gammy13 wrote:This product does not provide this at all.

This isn’t true! It just proves that you don’t know anything about Aerodrums nor air-drumming!

I’m able to let bounce my Aerodrums sticks up to full-stroke height, just in my hands, I can use open/close and Moeller technique, I have no really need for a practice pad. Haven’t you seen Richard Lee’s video about hand techniques. This is the way to start! 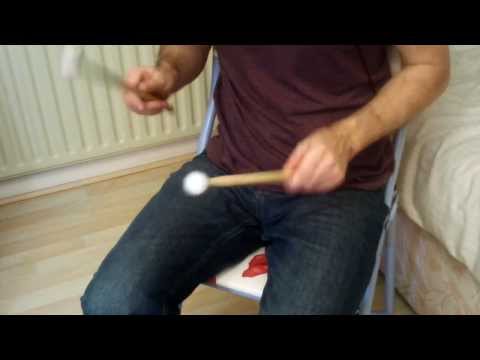 This technique transfers easily to real drums, and it’s a good technique, even for real drums. Aerodrums is much more than a substitute when you cannot make noise, if you are using the good technique it becomes a nearly perfect home-trainer for drummers, it can even help to discover and correct weak points in your technique. It works very well on muscle- and muscle memory development and does miracles for improving finger control. You can work rudiments, coordination and independence, the only things you cannot are brush techniques, press rolls, one handed rolls and very fast cymbal figures over 300 bpm. You might find out that you have to slow down the tempo for some things you are able to play faster on a real kit, but from a pedagogical point of view I don’t see any problem having to do so, this allows focussing on finger technique, articulation and dynamics. And everybody should know, for being able to play faster you need to work slower. And after, when you come back to a real kit, you might have the surprise that you can not only play faster than before what you have worked, but also more softly, if you want.

But today Aerodrums (and air-drumming) is still incorrectly the most underestimated thing in drum education. I know personally several people who are having prejudice against it without having tried, they even don't want to try! They say it’s not drumming.

But different than the four concurrent products I’m aware and don’t recommend to use for learning (Freedrums, Senstroke and Aerodrummer/PocketDrums), Aerodrums favours good drumming technique and I wouldn’t wonder if thanks to Aerodrums air-drumming would become a complementary discipline in drum-schools one day in the (far) future. Still two years ago I would have recommended that it would be necessary to work in parallel to Aerodrums with a practice pad, but no more today. Even not a beginner. At least not when following my method for air-drumming. But if an aerodrummer wants to learn to play acoustic drums it would be much more important he plays one on a regular basis, than to work in parallel on a pad.

In my flat I’ve played my first 6 years on an acoustic set, another 6 years on a silent drum set (the time were digital electronic drums costed the prize of a new car), followed by more than 20 years on several electronic drums and now since 4 years with Aerodrums. I don’t know if it’s because I can work different not having to worry about upsetting my neighbours, or if it’s because air drumming works in reality more efficient on muscle memory than normal drumming, but since decades of playing silent and electronic drums it’s the first time that I really feel that my personal work at home serves for more than just to keep in shape.

PS:
I have been working as a drum teacher since 1989 and have taught over 100 students of all ages in private lessons. I think I have at least a little bit of insight into all of that.
But I share your opinion about electronic drums, cheap ones aren’t good and good ones aren’t cheap, no one is prefect, and especially concerning noise, there isn’t any silent one, they are just more or less loud.
Top

^^^^^^^^Totally agree with all this!..nice reply Wolfgang...oh and I will see if I still have my jazz video

Wow thanks for all the videos , Wolfgang. I have been a regular every day Aerodrums user for I guess about a year and a half now. I am on the fence of getting an electronic kit, just because I don't really have a ton of room. I am a guitar player who lives in a condo.
Top

I found my outdoors Jazz video

...it was just a fun experiment but it’s back up anyway..

Thanks for your support. So we are at least two.
Nice you have reposted the John Riley's “Last Week” video. I would like to do a classified YouTube channel about Aerodrums and your video needs to be in there.
I’ve send you a pm.
Top
Post Reply
26 posts